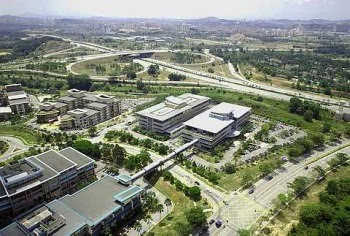 An aerial view of Cyberjaya city.

While Setia Haruman Sdn Bhd still holds the title “Master Developer” of Cyberjaya, another company Cyberview Sdn Bhd states that it is the mastermind for the development that ensures the city remains at the forefront.

Cyberview managing director Hafidz Hashim says the company’s role grows into one that encompassed construction and leasing out buildings, then evolves further into one where it is responsible for masterminding the entire development of Cyberjaya.

Hafidz Hashim … ‘There is a clear demarcation between Cyberview’s roles and that of Seti a Haruman.’

“There is a clear demarcation between Cyberview’s roles and responsibilities and that of Setia Haruman. The latter’s roles are scaled down to undertaking the construction of main infrastructure, planning the overall preparation of Cyberjaya and selling land parcels and other real estate developments.

“We now promote the city internationally, build infrastructure and develop and implement initiatives that will drive the city’s development which includes the creation of an attractive and sustainable eco-system for investment,” he tells StarBizWeek in an e-mail reply recently.

Hafidz says Cyberview focuses on adding value to Cyberjaya, with the aim to sustain the city’s attractiveness as a location to live, study, work and play. “For instance, there is no commercial value in installing traffic lights, bus stops and pedestrian crossings but these amenities have a great impact on the community who invest here.”

He says Cyberview promotes Cyberjaya as a preferred address for homegrown and international companies.

“We also take a step further by providing guidance to potential investors to identify what they need to make their investments here attractive. We try to find out their plans, requirements and expectations, and will tailor their investment packages accordingly,” he adds.

“Cyberview’s role is effectively as an eco-system creator that drives growth and development of Cyberjaya in addition to the provision of its physical infrastructure and support.”

To date, over RM1bil has been invested in Cyberjaya where since 2005, Cyberview has dedicated some RM80mil towards the physical infrastructure and sustained maintenance of the city.

Elaborating further on the existence of Cyberview and its roles in Cyberjaya, Hafidz says Cyberview, which is a government-owned company, is the landowner of the cyber city.

“We were given the mandate by the Government to spearhead the entire development of the township in line with its aspirations to realise Cyberjaya as MSC Malaysia’s Cybercity and as a global hub and preferred location for ICT, multimedia and services for innovation and operations; and to fulfil specific Government initiative in support of the innovation economy,” he says.

When the company was formed in 1996, its shareholders include Setia Haruman (55%), Nippon Telephone and Telegraph (15%), Golden Hope (10%) and Permodalan Nasional Bhd (5%). Setia Haruman was then asked to lead on the development of Cyberjaya.

Hafidz says that by 2005, following an internal restructuring in Setia Haruman and the company’s practice of awarding contracts at high premiums, Setia Haruman had to take up substantial loans.

“This has led to its gearing ratio ballooning to an unsustainable amount. Cyberview was then asked by the Government to rescue the ailing Setia Haruman that led to an expansion of Cyberview’s role,” he says.

Hafidz says that in 2006, the Government had asked Cyberview to start taking an active role in the implementation of various developmental and governmental initiatives.

“We were also tasked to undertake city-wide maintenance and rehabilitation and spearhead investor interface and community-centric programmes in Cyberjaya. That was when Cyberview began embracing its role as a community builder,” he says.

Through close consultations and feedbacks from its customers and the Cyberjaya community, Hafidz says Cyberview has created and implemented several unique initiatives which add to Cyberjaya’s attraction as an investment location.

“These include initiatives that reduce the cost of doing business in the area of transportation via the Dedicated Transportation System and the complementary intra-Cyberjaya “Park-and-Ride” system as well as energy management and cooling via the Cyberjaya district cooling system provided by Pendinginan Megajana, a wholly-owned subsidiary of Cyberview,” he says.

Other initiatives include in knowledge-worker and talent development where Cyberview pioneered the Cyberjaya GREAT programme.

Under this programme, interns are matched with knowledge-based small and medium entrepreneurs in Cyberjaya for a 6-month exposure to real work experience and they are given soft skills training to help them attain the criteria as outlined by the industry.

On safety and security issues, especially given the many high-impact investments by various parties in Cyberjaya, Hafidz says Cyberview has put into place the City-wide Surveillance System comprising 30 closed-circuit television (CCTV) cameras installed in the city.

Operating round-the-clock, these CCTVs, which is directly linked to the Malaysian Emergency Response System 999, enhance security level in the cyber city.

“This has paid off well as Cyberview has turned Cyberjaya into a premiere cyber city, experiencing exponential growth of 70% since 2006 in the number of companies choosing the city as their preferred location,” he says.

On the outlook for Cyberjaya in the coming years, Hafidz says he feels very optimistic.

“I’m bullish. Cyberjaya has been identified as a pioneer Green City by the Government and our development aims to reflect that while taking into consideration the needs of the community.”

“The challenge for Cyberview is to see the physical growth of Cyberjaya remains sustainable and attractive,” he says.

This site shows you Melaka Malaysia seen through the eyes of a retiree - Hantu Putih in Malay... - staying in Malaysia under the MM2H program: a 10 year multiple entry visa to Malaysia.

Malaysian are very friendly, Malaysia has no winter and you can stretch your European dollars even more in Melaka than in the capital Kuala Lumpur or in the MM2H town of preference: Penang.

Malaysia My 2nd Home (MM2H) is a 10 year multiple entry tourist visa for retirees, planning to retire and buy property in Malaysia.

Read the latest news and updates about the Malaysia My 2nd Home Programme.